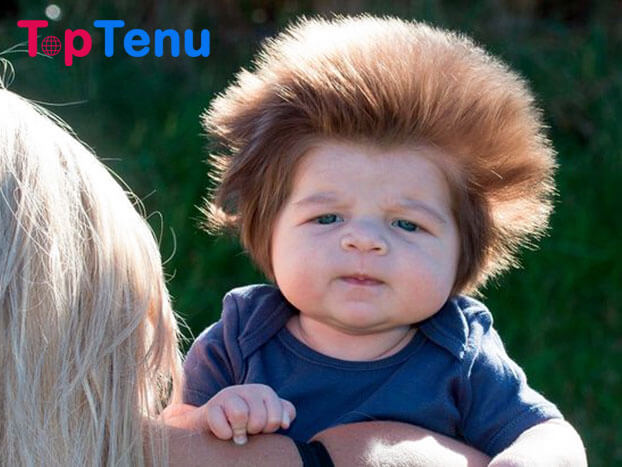 Top 10 Most Unusual Kids in the World

Top 10 Most Unusual Kids in the World

She lives in China and she’s the tallest 11-year old girl in the world! She is currently in the sixth grade. When she was only six, her height was 5 feet, 3 inches.

Zhang looks a lot different from her classmates. She even has a special kind of chair they made for her so she could feel more comfortable.

It is worth mentioning that both her parents are 6 feet high, which isn’t very typical for Chinese. Zhang likes to play basketball and her favorite player is James LeBron, who’s height is 6 feet 9 inches.

Currently, 12-year old Sophie Hollins is in the book of world records for being the tallest 12-year-old. She is 6 feet, 2 inches. But Zhang’s parents already contacted the Guinness people and send them information about their girl.

When Junior Cox-Noon was only 9 weeks, his little tiny head was entirely covered with long hair. His mom dries his hair with a fan each time after he has a bath.

There are just too many hairs. And every time they would go out to buy some food, people would stop by the boy to check out and admire his wonderful hair.

When kids are born, it’s alright to have a little bit of fluff on top. But when Junior was born, nurses started calling him teddy bear. His 32-year-old mom Chelsea Nunn said that the boy was born with a lot of hair right away.

But when they had a bath for the first time, she realized that her son is really hairy. By the way, some people used to say that sooner or later, the boy will have less hair with time.

But Chelsey says that for the past two month, not a single hair dropped. What’s more, they continue to grow. Wonder how the boy will look like in a year or two.

Olivia Farnsworth lives with her parents in England. A lot of people know her as bionic girl. She confused a lot of doctors and she scared the hell out of her mother when she got hit by a car.

A thing like that would probably kill any other kid. But Olivia never died and it didn’t even hurt her much.

She wasn’t scared, when the accident happened, she just stood up and went away like everything was normal. She just came up to her mother confused, asking what was going on.

After the incident, geneticist got interested in her case. They studied the girl and it turned out that her sixth chromosome was missing.

This genetic mutation lets her go without sleep, never feel pain, hunger or thirst. Many people would probably think that it’s like superpowers but unfortunately, that’s not the case.

Olivia requires constant control and attention. Because she’s completely devoid of the feeling of fear. She can burn herself with hot water and never even feel that.

She takes special pills that let her sleep. And it took her a few years to get used to regular food. Apart from that, Olivia is a very healthy and clever girl.

She’s like other kids, although she requires more attention and usually needs more time to adapt.

Related: Top 10 Most Crazy and Disgusting Candies in the World

It’s hard to imagine such thing until you actually see it. Virsaviya was born in Russia but then moved with her mom to South Florida.

Her heart is of the size of her first. And you can actually see it’s beating right under her skin. Her intestines are also there. She doesn’t have a press and diaphragm.

Virsaviya needs to be very careful. Any sudden fall or a hit can lead to serious damage and eventually heart stop.

When she was born, doctors thought the girl will never make it. But she lived, she grew up and till this day she feels completely fine. Although her first years were quite difficult.

Her heart is only protected by a thin layer of skin, despite that, she does sports and she’s generally very active. She looks like a little cutie but inside, this girl is a true warrior!

Samaya Clark-Gabriel might look like a small girl but thanks to intense basketball training, she can be considered a real master.

Just take a look at what she’s capable of. This girl is certainly a future champion. People ask her to various shows to show her phenomenal skills with the ball. You can Samaya at NBA game breaks and other events like that.

It is pretty hard to figure out this girl’s age. Looking at her pretty face we see a little kid but when we look at her body it feels like we’re looking at a woman, a relatively grown up woman.

This makes it almost impossible to figure out her age. This girl’s name’s Alexandra Siang and thanks to her looks and social media, she got pretty popular So she’s 14 right now and she wants to be a model in the near future. Although she already gets quite a lot of offers from various companies.

Each Mohammad’s hand weighted over 18 pounds. His mother said that the boy always had large palms, ever since he was born. Slowly but surely, they grew quite a bit.

Mohammed was even forced to quit school. His unusually large hands were the result of local gigantism – the kind of condition the boy suffered from ever since he was born.

Kaleem couldn’t hold forks and spoons, he couldn’t write or draw. His life was full of restrictions. Because his hands grew so enormously big, his parents were afraid that he wouldn’t able to live a normal life back in their native India.

They performed an operation on his right hand to make it smaller. Today we can see that his palms are much smaller than they used to be.

He was a boy with the biggest palms in the world once after all. The boy can now write, he can eat and hold things in his hands.

Despite the fact that therapy went well, Kaleem’s neighbors somehow think that is a child of a devil and that he was cursed because of the things his parents did when they were young. Neighbors don’t want the boy to come back.

However, the head of the village said that the boy can come back if he wants to and that he has a right to live a good life in the village.

These pics look like they were brushed with Photoshop but those are actually raw. 15-year-old Fu Wengui from Beijing has a kind of congenital disorder.

He’s got 3 more cervical vertebra than usual people. He’s got 10 instead of 7 and his neck is almost double the size of a neck of a regular person. And it’s far from being okay because the thing about his neck is that it makes him feel severe pain.

Sometimes he feels like he can hardly walk. They will soon remove the extra one and the boy will be able to finally live a normal life. Fu can’t wait to get rid of the pain and start living a normal life of a normal kid.

Most parents don’t let their kids spend too much time behind the computer. Luckily for Nadub Gill, this rule does not apply in his family.

His parents noticed how keen he was on information technology ever since he was little. They showed him various apps and their son got really good at his craft.

At the age of 10 Nadub has become Guinness book record champion. He got really good at using Times Tables Rock Stars app and was able to solve 196 mathematical problems. That’s 3 to 4 tasks per second, quite impressive, isn’t it?

Pan Xianhang is a boy with a difficult life. His entire body is covered in things that look like fish scale. It’s a rare genetic disorder called ichthyosis and it makes the boy itch all the time.

The disease made his eyelids, his nose, mouth and ears look different. It also restricts his movements. According to foundation for Ichthyosis and Related Skin Types, every year about 16 thousand kids are born with this disease.

Unfortunately, doctors never came up with remedy that would fully rid kids of the symptoms. But the research definitely improved and more and more kids feel somewhat better now.

So, are there any unusual kids that you’ve heard about guys? Maybe you’re one of them? Tell me about it in the comments, I wanna know!