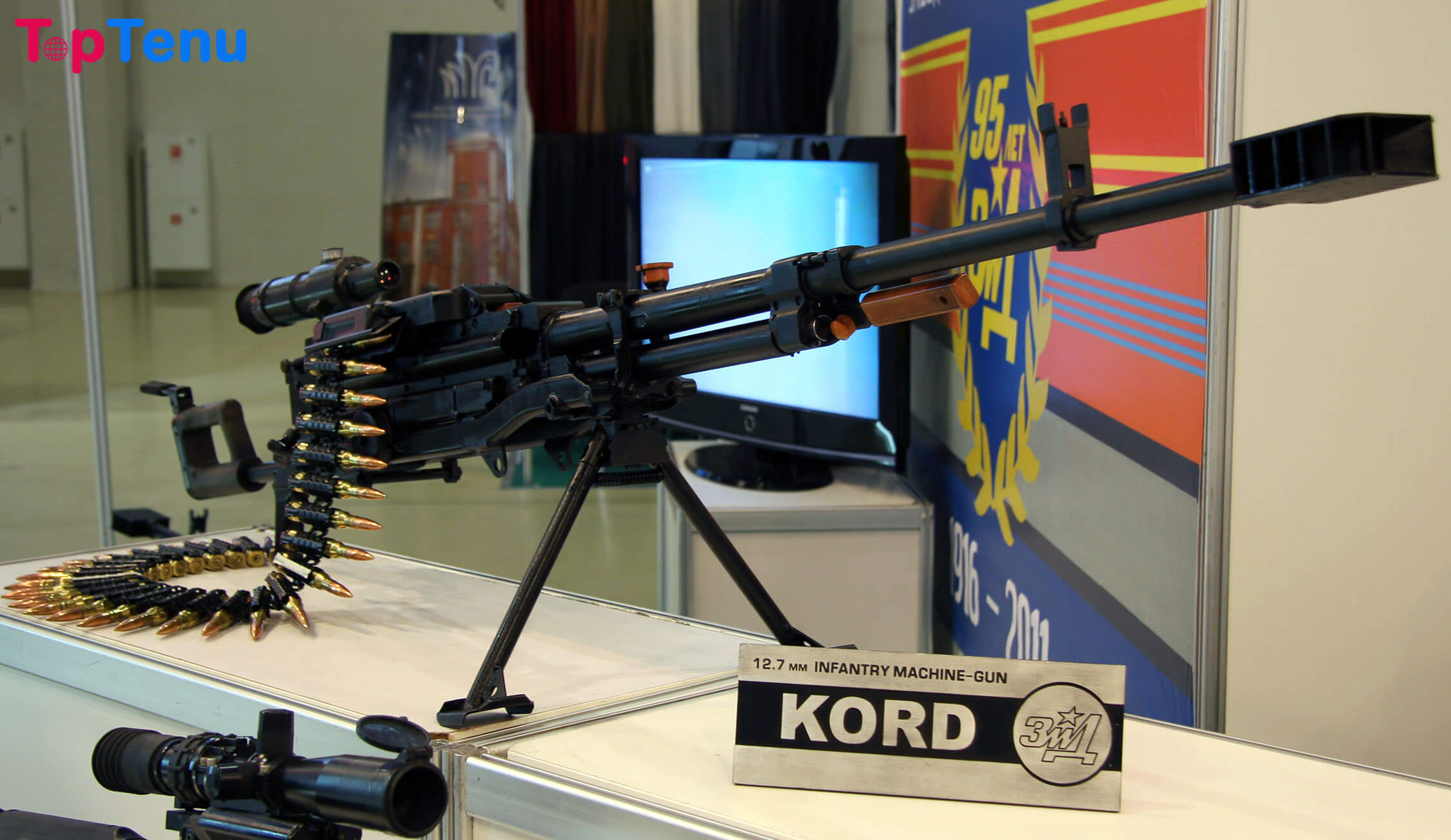 Most men like guns. Especially Computer Games. Real guns however are not toys and require lots of care and attention. You shouldn’t joke around when it comes to guns.

Unfortunately, people are always trying to create better weaponry, trying to make it more fast, powerful, and deadly. So today we are gonna have a look at some really powerful ones.

In pursuit of creating the largest and most powerful weapon in the world, American engineers have created a very interesting hunting pistol. It was created by Triple Action LCC.

The designers decided not to experiment with cartridges, they simply took some ordinary 50 BMGsniper large-caliber rifle ammo (12,7x99mm). They called their creation Thunder 50 BMG.

Naturally, it’s a single-shot weapon. Thunder 50 BMG is equipped with a muzzle brake, as well as one of the rarest hydraulic pistol barrel recoil systems.

All of this allows for a recoil reduction of about 20%. It is unclear how much this will help the shooter because the muzzle energy of this hand cannon is 15,500 J.

In the moment of the shot, flame bursts out of the slot and it sometimes reaches five meters from the barrel! If you’re not careful enough using this gun, it can pretty much brake both of your hands.

Also Read: Top 10 Strange and Weird Animal in the World

This is a 95-caliber super rifle created by SSK Industries. It would be more correct to call this weapon a kind of cannon because its barrel has a diameter of 0.950 in.

There were only three copies of this rifle created, one of them weighing 50 pounds and the other two 110 pounds.

The muzzle velocity is 640 m / s. And the recoil energy is 38 kilojoules, which is 10 times more than in your usual 7.62 caliber rifle. Well, the cartridges indeed monstrous look. Each bullet costs around $ 40.

This weapon was created in the 90s. “Kord” is a pretty lightweight weapon, it is very precise and relatively compact. And for its “weight category,” it is practically weightless.

The body of the machine gun weighs about 55 pounds, the tape includes 50 rounds (12.7×108 millimeters). In addition, the weapon can be used from a bipod or a tripod.

“Kord” is designed to fight light armored targets and weaponry, it destroys enemies at ranges up to 6500 feet and hits air targets at a range of a mile.

To improve the accuracy, the weapon can be equipped with optical or night sights. There’s even a tank version of this gun and is usually installed on an anti-aircraft T-90 turret.

Also Read: Top 10 Most Venomous Snake in the World

How ridiculous can a person’s passion for giant things go? It has no limit. Nowadays the largest shotgun looks like a bad joke from the 19th century, but it is nevertheless a real weapon that has been used regularly.

It’s called punt gun if you pardon the pun. And it helps hunters kill up to 50 ducks in one shot. This gun has titanic proportions. It’s like a real artillery piece. It was used in a way that the hunter didn’t have to spend too much time aiming.

One-shot was enough to kill a few week’s supplies of duck. Each of these guns was made to order or in small batches, so it never entered the mass market (wonder why).

Usually, in the largest shotgun in the world, they threw half a kilogram of shot and a fair amount of gunpowder.

There was no way anyone could just carry it in their hands, going around casually shooting ducks so they would usually attach those to hunting boats. It was easy to point the gun but it required quite a bit of skill: the hunter would point the boat towards the flock, correcting the direction of the shot with oars.

A successful hunter could knock out up to 50 ducks with a single shot. Mercilessly killing an entire flock with just one shot! Can you believe that? So, I guess that was more like a war gun or something.

Something you’d want to install on a ship. Some maniacs even put several guns on one single boat. Judging by the size, it seems like this thing produced a noise enough to kill all living things around with just a sound.

AA-12 is considered to be one of the best automatic shotguns out there. The AA-12 is packed with all the best features of a combat shotgun. It can fire five 12-gauge rounds per second. And despite such enormous destructive power, it’s got minimum recoil, which also allows one-handed shooting possible.

This is a fully automatic shotgun with a drum and stainless-steel receiver, which also means that this is a self-cleaning shotgun.

The AA-12 can also use the 3-inch FRAG-12 rounds, which allows for accurate shooting at a distance of approximately 600 feet. This one already proved itself on the battlefield.

It was tested by the US Marine Corps and they also mount them on autonomous helicopters. By the way, many filmmakers seem to like the look of it very much.

Here we have the largest 20mm rifle in the world. It’s a 20 mm from “Anzio Ironworks Corp. “And it’s a non-automatic single-shot weapon with detachable reloading bolt.

Its rotary shutter is connected to the shoulder rest. This weapon was designed using light materials and that’s why, despite the caliber and impressive size, it isn’t very heavy.

Anzio Ironworks produces a series of heavy sniper rifles chambered for the M61 Vulcan 20×102 mm aircraft cannon. The projectile speeds up to 1030 m / s and with a weight of 3.5 ounces, its muzzle energy is 57.53 KJ.

The Anzio rifle can shoot as far as 1.8 miles. The cost reaches 20 thousand dollars and it is a very popular weapon – both in the military and the private sector.

So, I guess we can call it one of the most powerful long-range sniper rifles in the world. By the way, it’s also one of the best modern anti-tank rifles.

Also Read: Top 10 Most Dangerous Dog Breeds in the World

Minigun uses 7.62x51cartridges. The main feature of this machine gun is its incredible speed along with a super-fast rate of fire, which is about 6,000 rounds per minute.

They use miniguns as heavy weaponry and installed them on helicopters and ground vehicles. Unlike most conventional weapons, Minigunisn capable of instantly opening fire.

First of all, the barrel block must spin up to the required speed. Although it usually happens much faster than they show it in films.

The rotation speed is set by the shooter and it determines the rate of fire: the minimum is 3000 rounds per minute and the maximum is 6000.

The rotation of the block is carried out due to an electric drive, so the machine gun requires a battery. The cartridges are fed by a long belt, put in a special box.

6 kilo Pfeifer Zeliska is an absolute leader when it comes to powerful revolvers is. This Austrian revolver is so huge that you might think that it isn’t real.

It was made by a small company Pfeifer in 1955 when they got offered the sketches from Adolf Celisk a local gun enthusiast. It’s got that extra powerful .600 Nitro Express cartridge.

It appeared in mass production in Britain at the end of the nineteenth century. They primarily used it to hunt elephants and rhinos, that’s why they call it elephant cartridge.

For almost a hundred years.600 Nitro Express remained the most powerful hunting weapon, its muzzle energy exceeds 10 thousand joules believe it or not! One cartridge costs about 100 bucks.

In the manual, they mention that one shot is enough to put down an elephant or even stop an attacking lion.

Although, there is a minor throwback. Thing is, many people s ears and noses bleed after the shot. Usually, they load double-barrel fittings with those.

They try to shoot from a distance of 100 meters at the list. The cost of one single bullet is 100 dollars. The first prototypes of the Zeliska weapon didn’t have any means for recoil reduction. It was almost impossible to shoot it. A number of these revolvers were produced for several individuals.

You probably heard about this one before. It’s an automatic weapon and it’s very quick. Metal Storm is a new generation fire shooter. And it’s packed with all kinds of electronics.

And thanks to those electronics, the bullets get into the trunk without delay. Even before the previous bullet leaves it.

Better yet, it fires a few dozens of bullets right away. And let me tell you, those bullets can put down a hella allot of humans. So, which weapon did you like the most? Make sure you tell us all about it in the comments. That’s it, guys! Thank you for watching and well see you later!