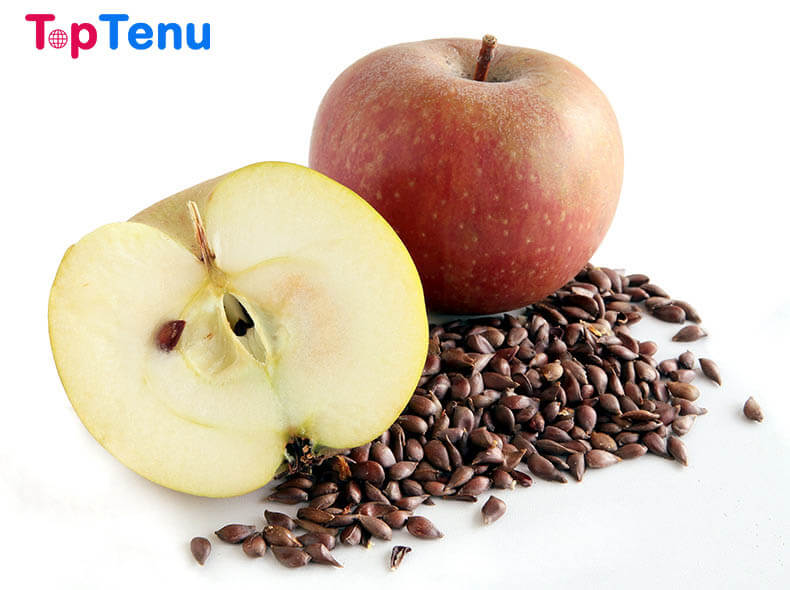 An apple a day should keep the doctor away, but if you eat enough apple seeds it may send you on a trip to the hospital. That’s because apple seeds contain small traces of cyanide, a powerful chemical compound that is highly toxic.

No need to worry though, as The seeds of a single apple won’t be enough to cause any ill effects, and it’s not even likely you could eat enough apples to cause you any harm.

People use the crunchy stalk of the rhubarb plant to make tasty pie filling, but you may want to stay away from the leaves.

The Leaves of the rhubarb plant contain two toxins, including oxalic acid which can cause shortness of breath, coughing and a burning sensation in the mouth.

Although a lethal dose of oxalic acid is fairly high at up to 15 grams, it’s suggested you completely avoid eating the leaves of the plant to avoid any problems.

Almonds are an incredibly popular nut, and come in 2 varieties, sweet and bitter. It’s the bitter almonds you want to avoid, as they contain cyanide and are highly poisonous.

Fortunately, all almonds sold in North America are of the sweet variety, so you’re free to eat as many as you want without ending up in the hospital.

Pufferfish Called Fugu in Japan, pufferfish meat is a popular dish that has to be prepared by specially trained chefs that go through 3 or more years of training. Why do they have to train for so long?

Pufferfish contain a deadly toxin called tetrodotoxin that is up to 1,200 times more poisonous than cyanide.

Even though the preparation of Fugu is strictly controlled in Japan, between 30 to 50 people are hospitalized every year.

In their raw state, Red Kidney Beans contain a toxin called phytohaemagglutinin. Eating just a few of these raw beans can cause nausea, vomiting and diarrhea.

Luckily for the fans of chilli con carne, simply cooking the beans destroys the toxin and makes them safe to eat.

Although rare, Nutmeg poisoning is completely possible. This spice was used in the middle ages to end unwanted pregnancies, and more recently some prisoners use it as a drug substitute to get high.

Freshly ground nutmeg contains myristicin, a psychoactive substance which can cause nausea, dehydration and even has some hallucinogenic effects.

The oil from Castor beans is said to have many natural health benefits, and it is commonly used in cosmetics, soaps and even medicines.

Stay away from the actual bean though, as chewing and swallowing the castor bean can actually kill you. Castor Beans contain one of the most toxic poisons known to man, ricin.

Just a few grains of ricin powder is enough to kill an adult human, and has been used by both assassins and secret agents to kill their targets.

This saltwater fish is a popular snack, as canned tuna is cheap and packed with protein. Unfortunately, eating too much Tuna can be hazardous to your health.

As a result of industrial pollution tuna can accumulate toxic mercury in their flesh. When consumed, this toxic substance can cause mercury poisoning, with symptoms such as headache, weakness, tremors, and loss of coordination.

It’s suggested that someone weighing around 150 pounds should eat no more than 1 can of albacore tuna per week.

The potato is the ultimate comfort food in many people’s diets, and the world’s fourth largest food crop. Potato leaves and stems contain a toxic substance called solanine, and if enough is ingested it can put you in a coma.

However, green potatoes also include this substance, and if enough is ingested it can do you serious harm. Potato poisoning rarely happens, and it’s important to never eat potatoes that are either spoiled, or green underneath the skin.

Eaten by the millions around the globe, Chili Peppers contain a chemical called capsaicin which is the active ingredient used to make pepper spray.

Capsaicin is strong enough to be used in industrial paint stripper, and can cause irritation of the skin, redness and swelling, and gastrointestinal problems.

If inhaled, capsaicin can constrict the airways and in extreme cases lead to asphyxiation and death. 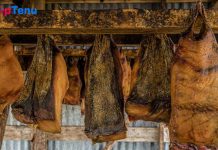